Inside Our Time: Those Years by Casey J. Adler 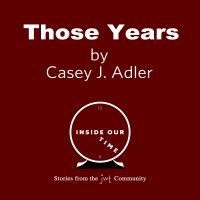 It started…with a bang.
………………………………………………..
During my first week of training for my position as a sound stage manager at Chapman University’s Dodge College of Film and Media, I–a disinterested and exhausted student — thought, “Maybe I’ll tell my boss there was a family emergency so I can leave.”  But I shrugged it off and continued to learn how to build flats and close elephant doors properly.  One hour later, I received a frantic call from my sister, “Dad is in the hospital.  Get to your apartment.  Mom and I are picking you up!”

“What happened?” I said.

“He shot himself in the face.  Get home.”

As I drove home, I unleashed every thought into the ceiling of the car.

It was 2008 and my father lost all our money in the stock market. Every dollar my dad earned from 35 years of working in the carpet business and every dollar from his inheritance. He lost his integrity and he believed he failed as a husband and father.

So, he shot himself.

But a funny thing happens when you want something so badly.  Sometimes, when you shove that gun in your mouth — with the tears streaming down your cheeks as the dog yells at you for food in the other room because you’ve been up all night, walking around the house in a manic death daze — sometimes, when you pull the trigger, the bullet doesn’t sever your spine or blow your brains out.

Sometimes, that .22 caliber slug lodges a millimeter from your spine, engulfed by your beautiful angelic neck fat and muscle.  Sometimes, the only injury you sustain is a chipped tooth and singed vocal cords and the surgeon tells your family,

“We’re not removing the bullet.  It would be too dangerous.  It’s a miracle.  He’ll be fine.  Get some rest.”

Like a rainbow, he survived.  Like a fault line, the myriad of familial issues remained ready to quake again.

We struggled for years to find a stable footing during the worst recession since the Great Depression.  We struggled with distrust from past misdeeds.  And we struggled to acclimate from the middle class to living at our grandfather’s house.

But those years shaped me into a man, considerate and empathetic to the woes of friends, foes, and strangers.  Those years turned my sister and I into writing partners.  And those years jump started my career in the arts with my dad by my side, driving me to each and every audition and each and every shoot day of my first breakthrough role in television, Amy Sherman-Palladino’s Freeform series, “Bunheads.”

Oh, those years, they started with a bang.

Thank you Casey, for your story! “Inside Our Time” digital series: